The three phases of the El Niño–Southern Oscillation (ENSO)

In this section we will cover:

In the neutral state (neither El Niño nor La Niña) trade winds blow east to west across the surface of the tropical Pacific Ocean, bringing warm moist air and warmer surface waters towards the western Pacific and keeping the central Pacific Ocean relatively cool. The thermocline is deeper in the west than the east.

Warm sea surface temperatures in the western Pacific pump heat and moisture into the atmosphere above. In a process known as atmospheric convection, this warm air rises high into the atmosphere and, if the air is moist enough, causes towering cumulonimbus clouds and rain. This now-drier air then travels east before descending over the cooler eastern tropical Pacific. The pattern of air rising in the west and falling in the east with westward moving air at the surface is referred to as the Walker Circulation.

During an El Niño event, trade winds weaken or may even reverse, allowing the area of warmer than normal water to move into the central and eastern tropical Pacific Ocean.

These warmer than normal ocean temperatures are associated with a deepening of the thermocline in the central to eastern Pacific. A weaker upwelling of cooler ocean waters from below also contributes to warmer sea surface temperatures.

Sea surface temperatures around northern Australia are cooler than normal and the focus of convection migrates away from Australia eastward towards the central tropical Pacific Ocean. This results in increased rainfall for nations such as Kiribati and Peru, but less rainfall over Australia. The greatest impacts are usually felt over inland eastern Australia, while effects for regions such as southwest Western Australia and coastal New South Wales can vary from event to event, and in western Tasmania the effects are generally weak.

During a La Niña event, the Walker Circulation intensifies with greater convection over the western Pacific and stronger trade winds.

As the trade winds strengthen, the pool of warmer water is confined to the far western tropical Pacific, resulting in warmer than usual sea surface temperatures in the region north of Australia. Sea surface temperatures across the central and eastern tropical Pacific Ocean become cooler than usual and the thermocline moves closer to the surface – cool waters from the deep ocean are drawn to the surface as upwelling strengthens.

Convection and hence cloudiness over the region north of Australia increases as stronger winds provide more moisture to the overlying atmosphere and the Walker Circulation intensifies. This strengthens the Australian monsoon and, if the conditions are right, directs increased humidity and rainfall inland over Australia. La Niña events are associated with increased rainfall over much of northern and eastern Australia. Parts of northern and central Australia tend to feel the impacts of La Niña more than they feel the impacts of El Niño.

The transfer of energy by moving the heated molecule from one place to another – also the rising of heated air which forms cumuliform clouds and results in precipitation. 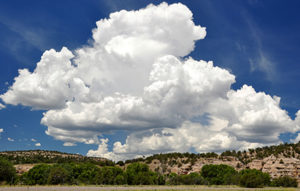 Upwelling is a vertical motion of water. When wind or currents displace water at the surface of the ocean, water from deeper in the ocean is drawn up to replace the displaced water. Deep water is generally cooler and richer in nutrients than surface water so upwelling is important in supporting productivity in the oceans of the world. 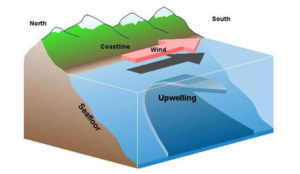 ENSO events are typically led and sustained by changes in the amount of heat held in the waters below the surface of the tropical Pacific Ocean.The deeper ocean is important in gauging the strength, and hence potential longevity, of an event. These large stores of heat (El Niño) or lack of heat (La Niña) act like a flywheel and ensure that an event will not dissipate rapidly. For example, during the 1997–98 El Niño event – which many consider the El Niño of the century – surface temperatures were around 3.5 °C warmer than normal in the eastern tropical Pacific, but temperatures at 150 m below the surface were up to 8 °C above average. Conversely, during the 2010–11 La Niña, eastern Pacific Ocean surface temperatures were up to 2 °C cooler than normal, but the subsurface temperatures were almost 7 °C below average.

Such large changes in the deeper ocean ensure that the surface waters stay warm or cool even when the atmosphere above might try to push the system back towards neutral, and so can sustain or lead an ENSO event.