But it’s time to bid adios to El Niño, the weather system responsible, and hola to La Nina — and the rainfall that comes with it.

Unseasonably hot days are here to stay, though, with Sydney set for a scorcher over the next few with temperatures pushing 30C.

On Thursday, the Bureau of Meteorology (BoM) released its three month climate outlook looking at temperatures and rainfall up to July.

Senior Climatologist Dr Andrew Watkins, said El Niño, which is caused by warmer sea temperatures in the Pacific sucking warm air over North America while leaving Australia hot and dry, was on the way out.

The weather system has not only meant long days on Australian beaches but has also exacerbated drought conditions and even led to an almost complete lack of a white Christmas anywhere in the world in 2015. 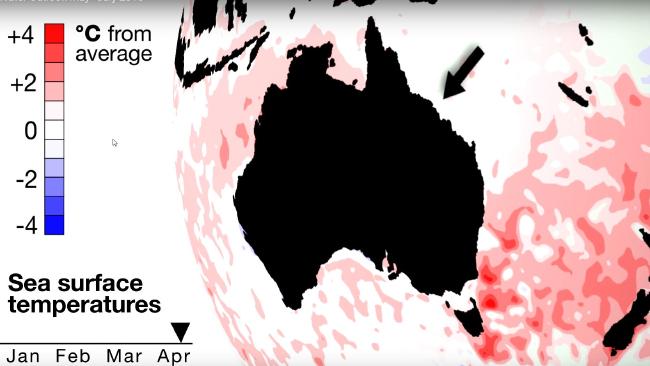 Sea surface temperatures have begun to cool in the Pacific. Picture: BoM.Source:Supplied

The current El Niño has developed into the most significant and largest for nearly two decades, ranking alongside those in 1997-98 and 1982-83.

“El Niño could be in its final month. (It’s) declining rapidly and is likely to be gone before winter, “ he said.

“We’ve already seen the first signs of cooler water off the South American coast … and the chances have risen for La Nina later in the year.”

A La Nina was now a 50 per cent possibility, double the normal odds, he said.

The weather system sees temperatures cool in the central and eastern Pacific Ocean. This would be particularly welcome news for the Great Barrier Reef which has seen extensive coral bleaching due to the warmer seas.

La Nina will also bring an increased risk of tropical cyclones. This would be a change for the year so far which has seen a record low number of the storms with just three cyclones compared to the usual 11.

The current wet season has been one of the hottest on record for both “short and long term rainfall deficiencies” in all states and territories.

“Water storages around Australia are now about 10 per cent lower than this time last year and many are likely to fall further,” he said. 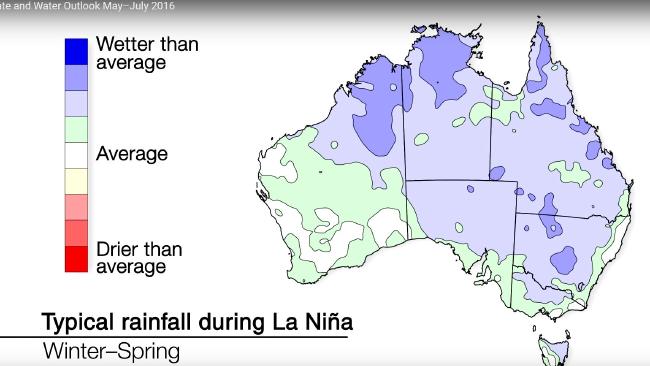 A La Nina will likely bring wetter than average conditions to much of Australia. Picture: BoMSource:Supplied

While more rain was expected, the mercury is likely to remain unseasonably high with a typical winter still out of reach.

That’s certainly the experience of Sydneysiders who sweltered through so many consecutive days above 26C during February and March, the spell shattered records.

Over the next few days there will be more spikes in the heat with those in the city’s west likely to see temperatures in the high 20s, or even as high as 30C, over the weekend and mid next week.

Conditions will be a little milder closer to the coast but still well above average in the mid-20s.

The mercury will also be in the high 20s in Brisbane over the next few days while in tropical Darwin, the mercury is hovering around 35C.

Adelaide will reach 25C on Thursday and Saturday but things will be cooler in Perth, Melbourne and Hobart with temperatures in the low 20s.