By Robert Ross on January 17, 2018
Published on 17 Jan 2018
From UN Office for the Coordination of Humanitarian Affairs

The unprecedented drought spanning over four consecutive poor rainy seasons has severely aggravated the humanitarian crisis in Somalia. Humanitarian needs have increased drastically due to limited rain, large-scale displacement, lack of access to basic services and, at its root, ongoing conflict 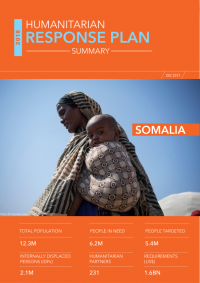 Humanitarian partners are reaching more than three million people per month, and are committed to build on the robust response systems established in 2017 and continue highly targeted famine prevention efforts in 2018. An estimated 6.2 million people, half of the population, will continue to need humanitarian assistance and protection, of whom 3.3 million will require urgent life-saving assistance. More than one-third of those in need are internally displaced persons (IDPs). In November 2017, 866,000 people were in Emergency (IPC Phase 4), reflecting a sharp spike up from 83,000 people in Emergency in January 2017. Malnutrition rates are on the rise, with the national median prevalence of Global Acute Malnutrition (GAM) rate at 17.4 per cent, significantly above the emergency threshold of 15 per cent. Disease outbreaks such as acute watery diarrhea (AWD)/cholera and measles remains. Over one million people have been displaced due to drought and conflict since January 2017, mainly from rural areas to urban centres and when added to those in protracted displacement from past crises, the estimated number of internally displaced in Somalia is now above two million.

The 2017 Deyr rains (October-December) started late and have performed below average in many parts of the country. This constitutes the fourth consecutive season of poor rainfall in Somalia, limiting pasture generation and water availability, reducing rain-fed crop harvests and exacerbating already high levels of acute food insecurity. As a result, more regions are likely to deteriorate to Emergency (IPC Phase 4). Forecasts indicate that due to a 65-75 percent likelihood of a La Niña phenomenon from October to February 2018, which is typically associated with below average rainfall totals in the Horn of Africa region, the 2018 Gu season (April-June) could potentially become the fifth consecutive poor rainy season in Somalia.