El Niño over, but its victims still need help 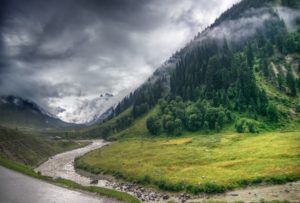 Storm clouds over mountains in India. La Nina is a welcome respite to countries like India which experienced the worst drought due to El Nino. Image: Shutterstock

Over 400 million people have been affected by the El Niño weather event that ended around the middle of this year. The droughts it led to are continuing the affect farmers worldwide, says a report by international NGO ActionAid.

Developing countries and humanitarian agencies urgently need money for relief and to help farmers get back on their feet. But there is widespread indifference and the amount available is falling short of the estimated amount needed by USD 3.1 billion.

Releasing the report during the November 7-18 UN climate summit in Marrakech, Morocco, ActionAid climate expert Teresa Anderson said, “This may be the largest drought the world has experienced.” It has affected large parts of Asia, Africa, North and South America.

El Niño is a weather phenomenon originating in the Pacific Ocean that affects rainfall patterns, and has led to droughts and floods many times in the past. But there has been something new during this El Niño. Scientists working on the report concluded that the El Niño effects were considerably worsened by record high temperatures, a result of climate change.

The World Meteorological Organisation has said 2016 is on its way to become the hottest year in the modern era, a record that has been broken almost every year in this millennium. Apart from the droughts across the world, it led to extreme water supply crises during this Indian summer.

The report, called “Hotter Planet, Humanitarian Crisis“, says that over 400 million people were affected by this combination of El Niño and climate change impacts, and smallholder farmers continue to be hit. Most of them have lost their savings, so they are not in a position to plant crops the next season, and they need urgent financial help.

The farmers also need training and help so that they can move to crops and farming techniques that are more resilient in a warmer world with more floods and droughts, says the report. Agricultural scientists in India and many international organisations have developed excellent crop varieties that can do this, but there is a big communication disconnect that prevents a sufficient number of farmers from taking advantage of this new knowledge.

ActionAid says there is another major disconnect – between climate rhetoric and disaster response. Anderson said, “It is shocking that in the year since the Paris Agreement on climate change, the world has been largely silent on one of the biggest-ever global climate emergencies.”

She pointed out that countries as far apart as South Africa, Ethiopia, Brazil and Vietnam have suffered their worst droughts in decades, and many countries have declared national emergencies. Many states in India and the US also declared emergencies this year for the same reason.

“It is shocking that in the year since the Paris Agreement on climate change, the world has been largely silent on one of the biggest-ever global climate emergencies.”

The report goes into detail about the social impacts of such droughts. Anderson said, “Women and children are being hit hardest. Women are missing meals and are walking hours every day to find water. Girls are dropping out of school, and child marriages are on the rise. In some countries, women are resorting to sex work to feed their families.”

She pointed out that despite these connected crises, developing countries and humanitarian agencies face a funding gap of USD 3.1 billion to meet the needs of those that are still affected. “Governments that promised climate compassion in Paris have apparently turned their backs on an actual global climate crisis.”

Apart from meeting this immediate funding gap, ActionAid has demanded: