Warmer summer than usual for most of the country, thanks to La Nina video

Summer’s on the way and if Niwa forecasts are correct, it’s going to be much warmer than usual.

A La Nina pattern is expected to make its presence felt as summer hits, bringing with it the potential for some beach days early in the season.

Niwa forecaster Ben Noll says a cooler start to November is expected before warmer temperatures kick in – and they’re expected to stick around. Thanks to La Nina, the whole country is facing warmer than usual temperatures for the whole summer.

The upper part of the North Island is expected to be more humid than usual.

But in the interior of Southland, Otago and Canterbury it’s expected to be drier.

The whole country is also likely to experience more easterly and north-easterly winds – bringing with them warm air.

As far as rainfall goes, it’s expected to be normal or above normal for most of the North Island 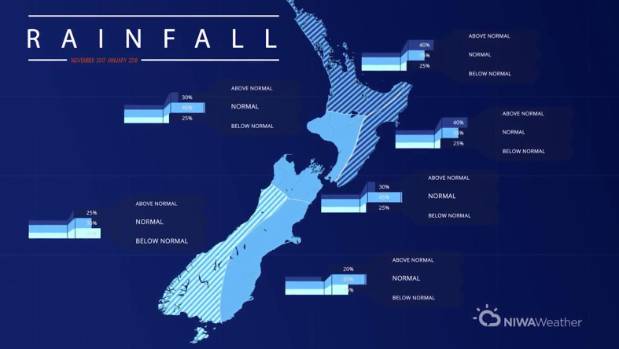 While North Island’s rainfall is set to be normal or above average for summer, much of the South Island is likely to be drier than usual.

The west and south of the South Island is likely to see less rain, while the east and north of the island is expected to receive normal amounts of rain.

It’s all thanks to La Nina – and there’s a 70 per cent chance it will stay for the summer, Noll says.