But its demise doesn’t necessarily mean we’re done with wild weather.
The recent climate event — characterized by warming waters in the eastern Pacific Ocean — has been one of the strongest ever recorded, and its impact has been felt far and wide.
Record smashing temperatures hit Thailand, Laos and Cambodia. In Malaysia, lakes dried up and vegetables withered. Weak monsoons and killer heatwaves left India barren and praying for rain. Storms pounded the Californian coast, leaving apartments teetering on cliff edges asbackyards dropped into the ocean.
The weather system may even have contributed to the spread of Zika by creating conditions that helped mosquito populations thrive.
So now that El Niño has definitely dissipated, is it finally time for us to breathe a sigh of relief and celebrate the fact it won’t be back for another two to seven years?
Maybe not.
Because La Niña is hot on El Niño’s heels — and here’s what we can expect from the weather system’s flip side.

Will Asia bear the brunt?

Just as with El Niño, the most consistent and significant impact will be noticed in the regions that border the Pacific Ocean, where the winds and ocean temperatures show the greatest variation. 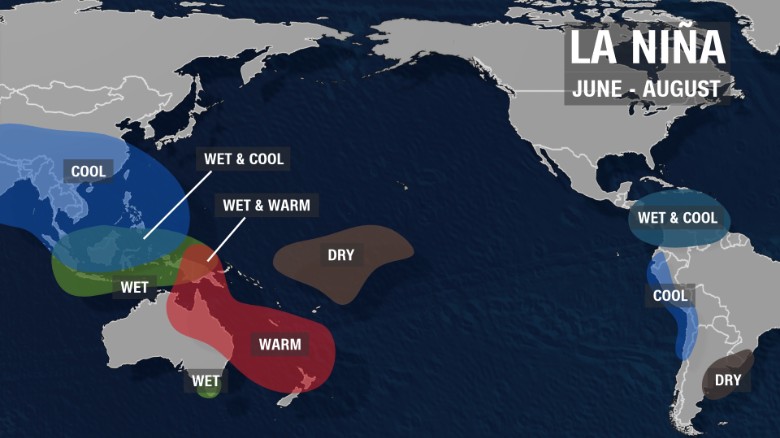 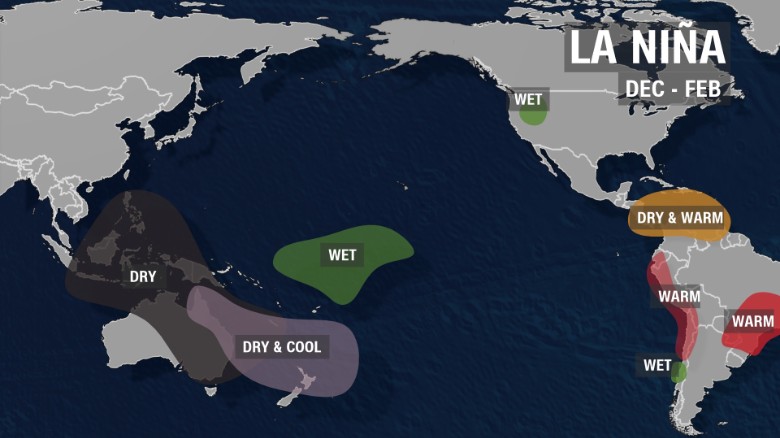 La Niña is also expected to give a boost to the Southwest Monsoon over India, which after two disastrous, drought-inducing monsoon seasons, is expected to be above average this year.
La Niña events have previously seen a drop in global average temperatures, which will be welcome news after the recent heatwaves that have struck the region.
However, it’s not all positive.
“La Niña increases the risk of intense storms and tropical cyclones for Australia’s east coast,” says Dr Agus Santoso, a senior scientist at the University of New South Wales. “While La Nina brings more rain which is good for farming, there are concerns. Flood mitigation measures should be in place.”

What about the other side of the Pacific?

Western South America will probably see drier than normal conditions, with the potential for drought in Peru and Chile. In the U.S., La Niña is likely to bring drier than normal conditions in the Southwest, as well as the Rockies and Southern Plains. Enhanced rainfall normally arrives in the Pacific Northwest and to a lesser extent over the Ohio Valley, as well as below normal temperatures. 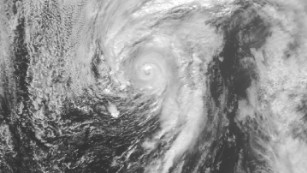 But perhaps the most impactful characteristic of La Niña in North America is the role it can play in the hurricane seasons. The Atlantic hurricane season generally sees an increase in the number of hurricanes and tropical storms due to weaker wind shear, which can inhibit tropical systems from forming.
Over the past decade there have been seven hurricanes or tropical storms that caused at least one billion dollars of damage in the U.S.
5 of the 7 came during the La Nina years of 2008 and 2011 — including Hurricane Ike in September of 2008, which caused over $30 billion in damage and resulted in 112 deaths.

What exactly is La Niña?

La Niña is the cool phase of the El Nino-Southern Oscillation (ENSO) climate pattern — a naturally occurring phenomenon that involves fluctuating ocean temperatures in the Pacific. El Niño is characterized by a warming of the waters in the central and eastern Pacific Ocean. La Niña features a cooling of those same Pacific waters. 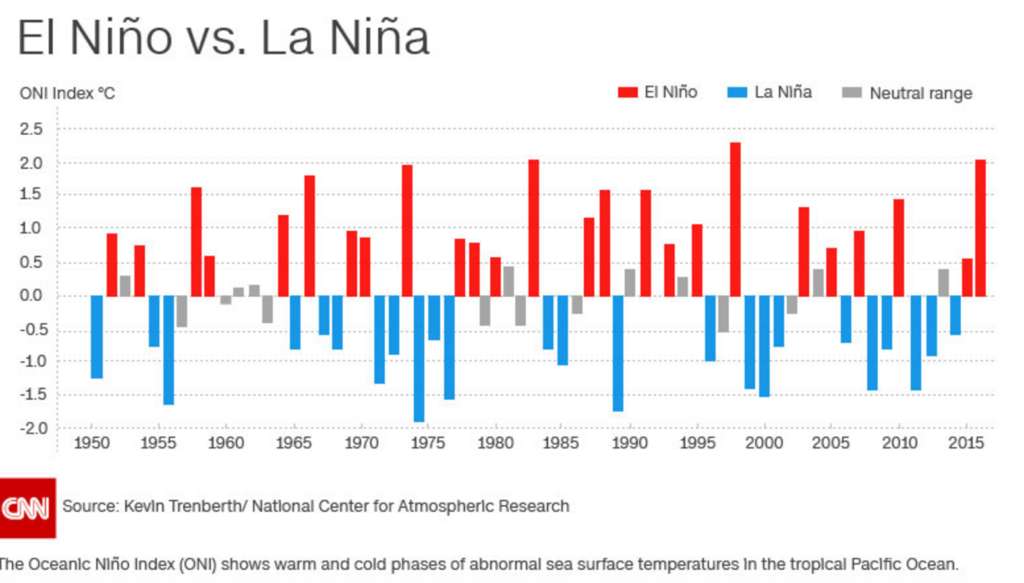 A La Niña setup begins when strong, easterly winds blow the top-most, warmer layer of water towards Australia and Indonesia, leaving the central-eastern Pacific Ocean as much as four degrees below average. Experts say that sea surface temperatures have dropped and been neutral since mid-May, which has signaled the demise of El Niño.
Climate models suggest the Pacific will continue to cool, and according to the U.S. National Oceanic and Atmospheric Administration (NOAA), there is a 75% chance of a La Niña forming by the end of this year.

What happened during the last one?

The most recent La Niña weather pattern began in mid-2010 and continued until 2012. In 2011, Thailand was hammered by three times its average rainfall. 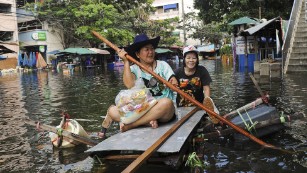 More than 75% of the country’s provinces saw flooding, which led to more than $40 billion in damage and thedeaths of 815 people.
In 2010, the system also brought flooding rains to Queensland, Australia, causing 33 deaths and more than $1.7 billion in damages.
“The higher sea surface temperature acts like an additional fuel to storms, and the elevated sea level increases the risk of storm surge, coastal erosion and flooding,” says Santoso.
“These are the kind of catastrophes that exert significant damage to properties and claim lives.”
According to Dr. Santoso, the risk for a strong La Niña is enhanced following a strong El Niño, such as the one we just had over the last year. While he says the believes our capacity to predict and anticipate disastrous weather events has improved in recent years, he still has his reservations.
“My concern is whether the public and the government are ready for a strong La Niña event,” he says.
Article