Another piece in the climate puzzle

UNIVERSITY OF HAWAII AT MANOA 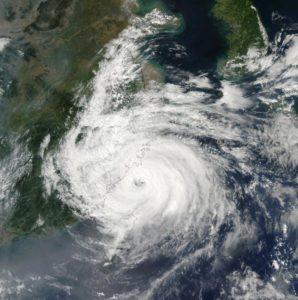 The intensity and frequency of strong tropical cyclones, as well as cyclone landfalls, has increased in recent decades in the northwestern Pacific Ocean, raising speculation about the root cause of this surge in destructive Category 4 and 5 storms. Atmospheric researchers at the University of Hawaii at Mānoa (UH Mānoa) International Pacific Research Center (IPRC) have recently published a study in Scientific Reports that demonstrates a strong connection between sea surface temperature patterns associated with the Global Warming Hiatus and changes in cyclone activity over the northwest Pacific Ocean, particularly increasing intensities in coastal regions of East Asia.

Climate change has been marked by a persistent, if uneven, increase in global temperatures through time. Around the turn of the century, 1998-2012, the rate of temperature increase apparently slowed, a phenomenon that has since been labelled the Global Warming Hiatus. During this period, while the Indian and tropical north Atlantic Oceans warmed, the tropical eastern Pacific Ocean experienced La Niña-like cooling. La Niña is usually characterized by cooler sea surface temperatures in the eastern and central Pacific, pushing cyclone generation westward.

IPRC’s researchers Yuqing Wang, Jiuwei Zhao and Ruifen Zhan, found that during the hiatus, dominant equatorial easterly winds caused cyclonic (counter-clockwise) circulation in the northwestern region of the Pacific Ocean, favoring the formation, and intensification, of cyclones there. These conditions also pushed more storms westward into the coastline of East Asia, generating increased landfall frequency of these intense storms. Interestingly, in the southeast region of the northwest Pacific, local atmospheric circulation was the opposite, anti-cyclonic (clockwise), inhibiting cyclone generation and intensification in that region.

In conjunction with these wind patterns, the IPRC researchers established a strong correlation between areas of warmer sea surface temperatures and intense cyclone occurrence in the northwest Pacific Ocean. This supports the conclusion that the higher frequency of greater intensity cyclones over the last few decades is closely tied to the atmospheric circulation patterns and sea surface temperature distribution induced by the hiatus.

“Most previous studies have suggested that with general global warming, the numbers of tropical cyclones over the northwest Pacific will decrease. Instead, over the last couple decades, more tropical cyclones formed and intensified over the far northwest Pacific,” explained Wang. “Our study shows this was due to increased local sea surface temperatures and reduced vertical wind shear associated with the hiatus conditions.”

Wang and his co-authors emphasize their results also underline the importance of acknowledging that there are swings between warmer and cooler phases due to natural climate variability, even within an overall warming climate. When referring to global warming impacts, therefore, attention needs to be given to the variable responses to these different phase conditions.