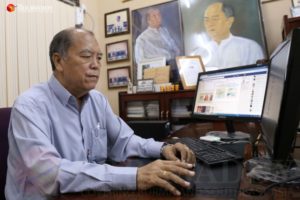 After Burma saw one of the most stifling hot seasons (March to May) on record, brought on by the El Niño weather phenomenon, veteran meteorologist Tun Lwin warns of a 70 percent likelihood of the related La Niña phenomenon hitting Burma from September.

La Niña’s weather effects are caused by a cooling of the surface of the equatorial Eastern Central Pacific Ocean, and are generally the inverse of that of El Nino.

According to Tun Lwin, La Niña would bring colder temperatures and higher rainfall. This comes as a warning to Burma, which experienced deadly floods due to torrential rain in July and August last year. Irrawaddy reporter Thuzar talks to Tun Lwin about La Niña and Burma’s year of extreme weather.

What are current notable weather patterns in Burma?

El Niño ended in Burma early this month. La Niña would start in September, bringing cold and heavy rain. Meteorologists have predicted that rainfall this rainy season, starting in June, will exceed that of last year in Burma and elsewhere in South East Asia. Monsoon winds are currently strong in the Bay of Bengal. We have to be on our guard. Recent rain reminds us of the deluges of July and August last year.

Countries across the world, including Burma, appear to be grappling with the effects of climate change. What is your view?

The whole world is experiencing climate change, with different impacts felt in different places. What is constant is a rise in worldwide temperatures year on year. Some places see persistent rain while others see drought. In Burma, we predicted extreme weather patterns early this year. It is raining across Burma now, but it is not yet raining in Indonesia and Malaysia. For the past 12 months, the Southeast Asian region has seen low rainfall and hot weather. So far, Arakan State in the west, and Kachin State and upper Sagaing Division in the north of Burma have experienced torrential rain. Yet, rainfall is low in Vietnam, Thailand, Cambodia.

What is your view of post-disaster relief and rescue operations in Burma compared to other countries?

Burma has a lot to learn from other countries, even from neighbors such as Bangladesh and Thailand. It is important also that Burma adopts a system most suited to the country.

Are you satisfied with the actions and measures of the current government regarding disaster prevention?

We now have a new government, which we have greater hope in. The government has shown interest [in disaster management] and has sought advice from experts. They have reached disaster areas promptly and are totally different from the previous government. There will be progress, although it will take time.

What measures should the agricultural sector adopt to adapt to climate change?

The governments should seek advice from agriculturalists. I can only discuss weather. We predict extreme weather this year, which will surely have an impact on agriculture. It could result in low harvests and the destruction of crops.

What is your prediction on the likelihood of flooding in Burma this year?

Some places have already experienced floods. According to NASA satellite photographs, the likelihood of flooding is high in southern parts of Pegu, Rangoon and Irrawaddy divisions.

Do you predict that Burma will see severe flooding like last year?

It is not impossible. People need to be on the alert. They need to keep their ears open to weather forecasts and alerts from the authorities. And responsible authorities should take action according to their own disaster prevention and response plans.