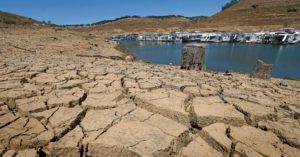 Mark Ralston | AFP | Getty Images Dried mud and the remnants of a marina are seen at the New Melones Lake reservoir in California.

Talk of El Nino has barely faded from the internet, and already attention has turned to what El Nino’s other half will bring to North America, especially drought-stricken regions in the West.

La Nina is El Nino’s counterpart in the cycle known as the El Nino Southern Oscillation, and with El Nino, it makes up one of the three phases of the oscillation. The third phase is a neutral one in between the two other.

La Nina is essentially EL Nino’s opposite. As El Nino represents a warming of ocean temperatures in parts of the Pacific Ocean, La Nina is a time of cooling, usually of about 3-5 degrees Celsius, in the same region.

That does not sound like much, but as with her brother, the slight cooling is often blamed for a variety of phenomena, even hurricanes.

And in California, meteorologists, farmers, politicians and ordinary residents wonder what La Nina will bring for the dried out state.

“I would be concerned about the drought continuing,” said Dave Pierce, a climate researcher at the Scripps Institution of Oceanography, in an interview with The Orange Country Register on Monday.

If this is true, it is bad news for a state that may have to come to terms with perpetual drought, particularly in its southern regions.

Parts of California have received rain in recent months — notably in the northern regions of the state. But the monstrous storms some predicted to accompany El Nino did not materialize further south. Contrary to what some forecasts had believed, as the OC Registernotes, El Nino’s warm temperatures in the Pacific failed to collapse an area of high-pressure off the coast of the Pacific Northwest that had been keeping all but the most severe storms from moving toward Southern California.

Those numbers have not budged much since then, according to California’s Drought Monitor.

This is costing money. Agricultural credit bank CoBank said in a reportissued in May that the drought has so far cost agricultural producers in the state about $1.5 billion in lost revenue.

Stephen Baxter, a meteorologist with NOAA’s Climate Prediction Center, told reporters in May that La Nina temperatures are likely to begin developing this summer, and that there is a 75 percent chance of La Nina conditions by the end of the year.

And La Nina conditions historically bring less rain to much of California than El Nino or neutral conditions. So, the drought could drag on, or even worsen.

Mark Cowin, director of the California Department of Water Resources, told The New York Times, the state is “just one dry winter away from returning to where we were,” despite the fact that drought conditions have greatly eased in some California communities.

This is not guaranteed, and some meteorologists have said anything can happen with La Nina this year.

“Climatology has its limitations as far as what the impact will be from a La Nina or an El Nino,” said Jan Null, a meteorologist based in Northern California, who runs Golden Gate Weather Services. “The climatology is not a forecast,” in the way that a short-term weather report is a forecast, he added, saying that many people mistook climatological predictions for El Nino as forecasts of what would happen, rather than as averages of the full range of possible scenarios.

Correction: Jake Crouch is a scientist with the National Centers for Environmental Information at the National Oceanographic and Atmospheric Administration. Jan Null runs Golden Gate Weather Services. An earlier version misstated the names of the organizations.