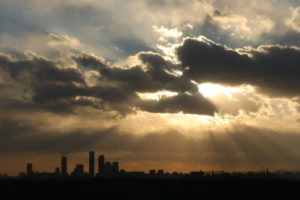 The amount of CO2 measured atop Hawaii’s Mauna Loa volcano could end up reaching a record high throughout 2016 thanks to the recent El Niño weather phenomenon, the BBC reports. According to a study from the UK Met Office, the volcano’s recorded CO2 levels could stay above 400 parts per million for the entire year, in part because El Niño has had a drying effect in the tropics. You might remember that the NOAA also announced the highest recorded jump in CO2 levels at Mauna Loa earlier this year — El Niño is just exacerbating humanity’s troubling effect on the environment.

While we won’t see an immediate environmental effect by the CO2 levels, it’s still 50ppm higher than what scientists have deemed safe levels. The Earth hasn’t seen steady CO2 levels above 400ppm since three to five million years ago. Additionally, the Met Office expects carbon dioxide numbers to rise by 3.15ppm this year, another record figure (typically we jump 2ppm annually).

“It’s important to note that this year’s rise in CO2 is bigger than the last El Niño, in 1997/8, because human emissions have gone up by 25% since then. So, it’s the natural effect on top of the increasing human effect,” Professor Richard Betts of the Met Office told the BBC.

The most depressing thing about this report? We likely won’t see CO2 levels to dip below 400ppm for a long, long time. There’s a chance that La Niña, an opposing climate event to El Niño that cools the Atlantic Ocean, might push carbon dioxide numbers down, but not enough to go beyond the 400ppm threshold.

If anything, the news is a clear sign that every industrialized country needs to push harder towards reducing greenhouse emissions. It’s not impossible: Scotland just announced that it managed to lower its emissionsby 45.8 percent compared to 1990. That’s a full six years ahead of its 2020 goal to reduce emissions by 42 percent.