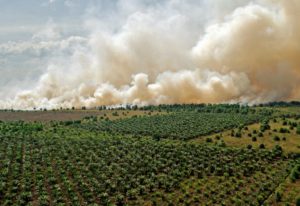 The choking haze that enveloped Singapore and Malaysia in 2015 is unlikely to be repeated next year, an Indonesian official said yesterday, as the weather in Sumatra and Kalimantan is forecast to return to the regular pattern of past years, thus reducing the threat of forest and land fires.

The number of hot spots last year – triggered by fires covering forests and the dry land on these two giant Indonesian islands – were recorded at a staggering total of 78,164, spawning the smoky haze that sent air pollution indices in Singapore and Malaysia to very unhealthy levels.

The number of hot spots this year was recorded at 14,490, with no major haze recorded.

The weather pattern next yearwill not likely swing to either extreme points – too dry or too wet, said Dr Sutopo Purwo Nugroho, spokesman for Indonesia’s disaster management agency BNPB.

“There won’t likely be any strengthening of either El Nino or La Nina. That means there won’t be a dry season that is too dry. Likewise with the wet season,” Dr Sutopo told a year-end media briefing in Jakarta.

El Nino is a weather phenomenon which leads to prolonged hot and dry weather in the region like it did last year, while La Nina gives an opposite effect.

Indonesia will still have forest and land fires next year, he said, but the hot spot counts and their coverage would be small compared with 2015. “Why can’t we put the hot spot count to zero? It is difficult because this is about a custom and people earning a living. Villagers clear their farm by burning.”

Dr Sutopo said the significant decline in the number of hot spots this year was not only due to more friendly weather but also to harsher law enforcement on errant corporations and individuals, and better fire prevention measures by the government and private sector.