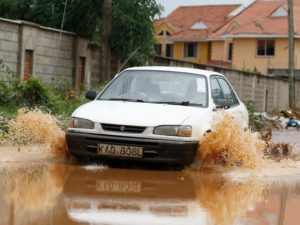 A motorist drives through the flooded Fairways Road in South C, Nairobi, on April 5. Nairobi residents grappled with flooded streets and blocked roads as heavy rains pounded the city and its environs for more than three months, following a long dry period /JACK OWUOR

Latest forecasts indicate a 55-70 per cent chance of a La Niña developing towards the end of this year, the Food and Agriculture Organization of the United Nations has said.

FAO in an early-action analysis for a potential La Niña in 2016–17 said localised areas of East Africa are mostly affected by drier-than-normal conditions during La Niña events, particularly from November to March.

“This would particularly occur in regions of Ethiopia, South Sudan, Somalia and Kenya. Localised flooding can also occur in East Africa, such as northern Ethiopia, central and northern Sudan,” it says.

FAO said the intensity of the La Niña climatic phenomenon generally peaks between October and January.

The global agency said the above-average rainfall could bring relief to drought areas and help restore pasture and crop production.

FAO also said La Niña would bring drier-than-average conditions from January to May 2017 in various countries in Central Asia.

The report consolidates information on La Niña’s potential impact on agriculture and food security in regions dealing with the consequences of EL Niño.

It also provides early-action recommendations in the agriculture sector to reap benefits of La Niña, or prevent, mitigate and prepare for its negative effects.

FAO said positive effects of La Niña on crop production would only be able to alleviate the current high levels of food insecurity from February 2017 onwards, when the main maize crop matures and is harvested.

In drier-than-average conditions, FAO calls for regular vaccination before November and December.

La Niña is the cooling of sea surface temperatures in the tropical Pacific, which occurs roughly every three to five years, lasting from six to 24 months.