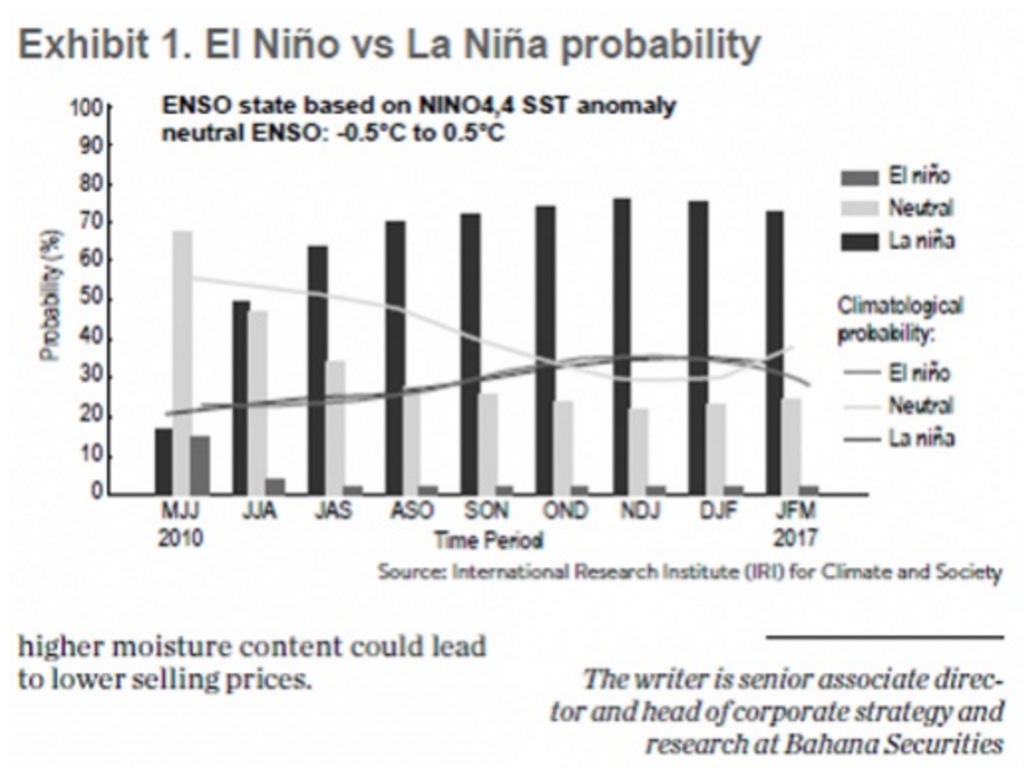 A La Niña weather pattern is expected to develop in the Northern Hemisphere during the summer of 2016, with a 75 percent chance of occurrence during the fall and winter of 2016 and 2017 (Exhibit 1), according to the International Research Institute for Climate and Society.

This is likely to have the following impact on our covered stocks and sectors:

The winners include the cigarette sector and healthcare. Cigarette sales typically increase during the rainy season and healthcare is expected to report higher sales due to flu-related illnesses.

Crude palm oil (CPO) prices could rise amid lower production, triggered by an inability to reach optimal harvest and by soil shock caused by heavy rains. Tin comes in a close forth with the possibility of lower to flat production volumes for PT Timah (TINS) resulting in higher tin prices. This could be offset by higher costs stemming from increased onshore mining as the sea becomes increasingly unfriendly.

Possible losers include retail. La Niña is expected to have a negative impact on retailers in general as people tend to stay home and shop less during the rainy season. This is particularly true for Ramayana Lestari Sentosa’s (RALS) low-end shoppers who, by-and-large, do not own cars. The taxi sector is also expected to lose out as any rise in the number of passengers due to rain is likely to be offset by heavy traffic and a preference to remain indoors.

Nickel comes in a close third as Indonesia is not a major producer of refined nickel. Prices are unlikely to move up in any major way and furnaces are not expected operate to optimal capacity during heavy rain, leading to lower or flat production output. Lastly, the coal sector. As the world’s fifth largest producer, the country’s lower coal output may not translate into sufficiently high coal prices and coal’s higher moisture content could lead to lower selling prices.